From the "One Game A Month" site: "Your quest is to try to create one new game each month. This challenge is meant to help you on a personal level. There are no prizes, signup fees or rules. It might sound crazy optimistic, but you CAN do it."

Says it all, really.

I took part in this during 2013, and successfully complete 12 games in 12 months. They are currently hosted on my Cyberealms Games site, but here is a more detailed run-down of them all. 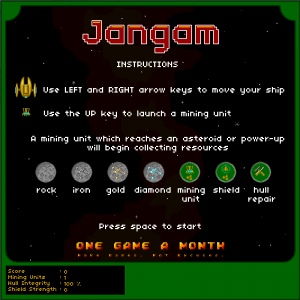 This is a retro-style game where you have to mine asteroids while attempting not to get hit by them. It's very simple, there are no levels (though there are some power-ups), but as it's a kind of game that I've never attempted to write before I'm quite pleased with it. 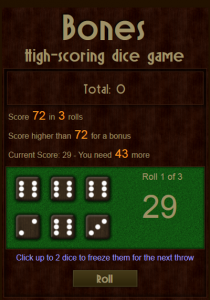 February was not a great month, and I only had time to put together something very basic. Even then I had to leave out some of my ideas. It is a simple dice game, where you have to accumulate a total score over several rolls to try to beat the target. 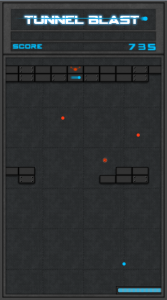 My first attempt at using HTML5's "canvas" element for a game, and it turned out to be surprisingly painless. This one is a fairly straightforward arcade game, which takes a Breakout style game and adds the twist that instead of having separate levels you have constantly-descending rows of blocks which you must blast your way through. Once again I ran out of time and only included a few of the power-ups and features that were originally intended. But then, part of the challenge of One Game A Month is deciding on what you have to leave out in order to meet the deadline!

April: Clank and the Toy Factory 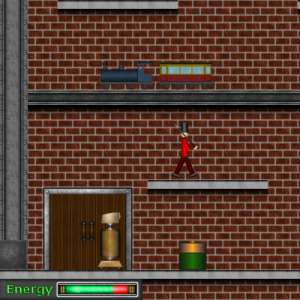 After my successful attempt at using the HTML5 canvas for March I decided to try again, but this time with a rather more ambitious game. This time it is a 2D platform game, based on an idea that I have had for a long time, so it was very satisfying to finally create the game. Once again, only having a month to write it meant that it is not what I'd call a complete game, and there are some definite problems without, but it is playable and I might well go back to it (after the One Game challenge is over!) and work on a more polished and finished game.

May: The First Snows of Winter 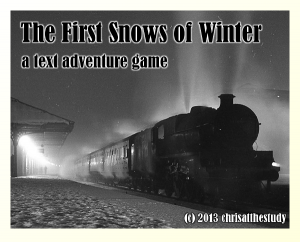 Unlike all my other games in the One Game challenge, this one has been years in the making! I designed it many years ago, and it has sat mouldering in a folder since then. Almost all of it was fully worked out, and about 80% of the text was written, so it didn't take too much work to bring it to completion.

As a result it is (so far) the only game in this collection that I regard as truly finished. It is a very old-school text-adventure game, based in a slightly unusual fantasy world (nowadays it would probably be classed as Steampunk, but such a label didn't exist when I first started it!). 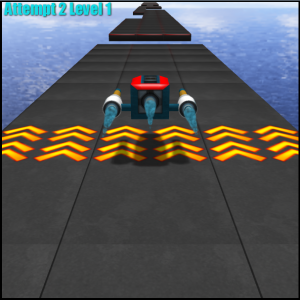 After getting to grips with HTML5 canvas, this game moves on to the next stage: 3D via WebGL. I used the rather excellent Three.js library (there is a link on the game screen), which made light work of most of what I wanted to do. In fact, I spent more time wrestling with Blender (the 3D modelling package) in order to create and texture the Speeder itself. That was an exercise in frustration, but I hope that I have begun to get to grips with it, because there are other things that I would like to use it for.

This is a bit different, as it is a new version of a previous game, "The First Snows of Winter", which is now available in a Mac and Linux compatible version.

You will need a separate program to run it, as it is a TADS3 game and needs a suitable TADS3 'player' program (the Windows version that I released in May has one built in, but there isn't an equivalent for the Mac or Linux). I would recommend the QTADS player, which seems to be the most widely-used, and certainly handles this game without problems. 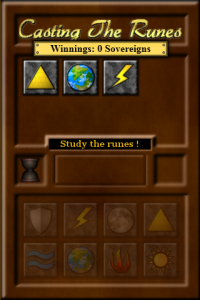 The title of this month's game is a reference to Casting the Runes one of my favorite stories by M R James, though the resemblance to the original story is almost non-existent. I describe it as a pattern-sequence memory game, which doesn't really convey very much. The object of the game is to remember and then repeat a sequence of runes. It starts out very easy, and gradually gets harder, though you might find it a lot easier than I do, as my short-term memory is rubbish!

August: To The Stars 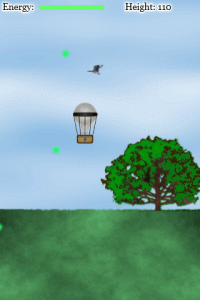 My August game was distantly inspired by the games at Orisinal Games, by Ferry Halim, and is a very simple game whose controls consist of nothing other than clicking the mouse on the screen, trying to direct the balloon in order to capture the green 'energy balls' and avoid the birds that fly across the screen. 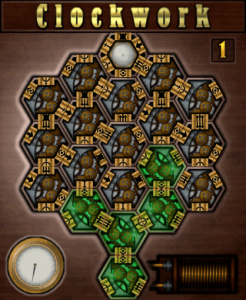 Every month there is an optional theme for the OneGameAMonth games. I've ignored this for most months, but this time I actually created something that was in keeping with the month's theme, which was "Hexagons".

It is also possibly the game that I am most pleased with, mainly because it isn't inspired by any other game, but is instead entirely my own idea. The object is to rotate the hexagons in order to match up the connectors between them, and to create a chain of connected hexagons from the bottom to the clock at the top. 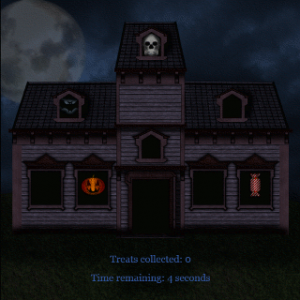 As it was October I naturally had to come up with a Halloween-themed game, which proved harder than I expected, and in the end the game was written in the last week of the month.

Because I was short of time I had to do something very simple, and games probably don't come much simpler than this one. The windows of the house periodically display tricks or treats, and the object is to click on the treats before they vanish again, and to avoid clicking on the tricks (the screenshot is a little misleading, as there is never more than one item visible at any one time). 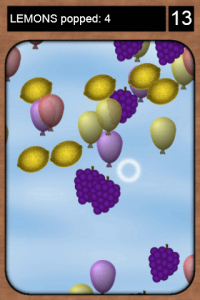 For November I created another very simple game, and probably spent more time creating the graphics than working on the actual code. The object is simply to pop as many balloons (or other items) of a specified colour as you can within a time-limit. Each level of the game adds more colours, and you have to avoid popping balloons of the wrong colour. 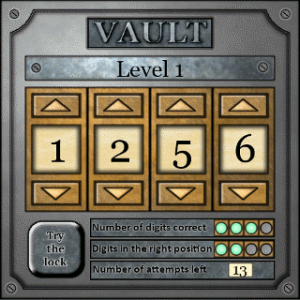 The last game of the One Game A Month challenge, and this time it is a sort of code-breaking game. You have to try to guess the code by changing the digits and then using the clues of how many digits you have right and how many of those are in the right position.

It's rather hard to explain, perhaps it is more obvious when you actually play it.